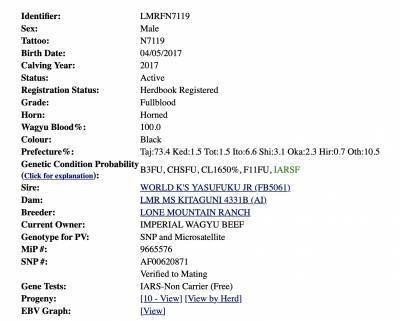 Unit Price with any combination of
Volume Discount Eligible Bulls 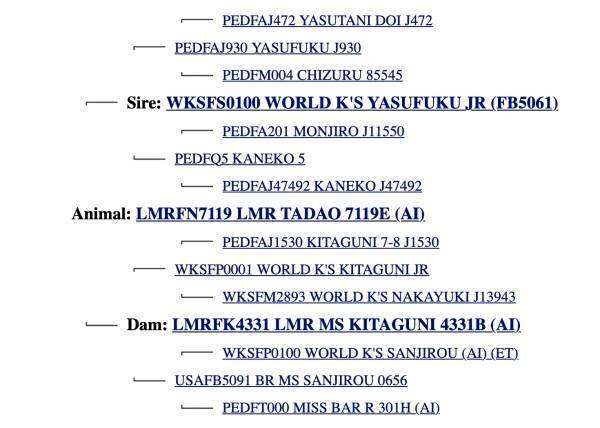 Free of all known Wagyu Defects: Free, including IARS

WKS Yasufuku Jr and WKS Kitaguni Jr occupied the two top spots for IMF% as both Sire and Dam Sire in 2017. Those two sires simply outperformed all other sires. As mentioned in 2017, “Most interesting about Yasufuku Jr’s numbers is that as a sire, it does not seem to matter the dam sire – Sanjirou, Toshiro, Kitaguni, etc: across the board he seemed to boost the marbling by a large margin. But, when Yasufuku Jr is analyzed as dam sire, it is a different story – the vast majority were sired by WKS Kitaguni Jr”

WKS Yasufuku Jr is a linebred bull, like his sire Yasufuku J930 and traces three times to Yasumi Doi J10328. His dam sire, also sired by Yasumi Doi, is Monjiro 11550. WKS Kitaguni Jr, a valuable son of Kitaguni 7の8 J1530, was born October 7, 1994 shortly after WKS Nakayuki J13943, his dam, arrived in the United States (exported by the Mannett Group).